Independently acclaimed as the ‘most reliable,’ ‘forward-looking’ of all quant-driven political risk ratings and forecasts.  Trusted for over forty years by the world’s financial, governmental and academic elite.

Our firm has been interviewed or quoted by such publications as Bloomberg, The Wall Street Journal, Global Finance, LatinFinance, Institutional Investor, Euromoney, Reuters, CIO, INC Magazine, International Resource Journal, In The Black and African Business Journal.

Below are some of our recent appearances in the media:

Bharali, I and Gill, I. “Measuring the gap between ability and effort in domestic revenue mobilization.” The Brookings Institution. 29 April 2019

Al-Ubaydli, Omar. “Why are investors so interested in Saudi Arabia?” Al Arabiya. 28 April 2019

Farai Shawn Matiashe and Lynsey Chutel. “The show of force by Zimbabwe’s military this election is about their own power, not politics.” Quartz Africa. 2 August 2018

Natasha Turak.  “More than 100 politicians have been murdered in Mexico ahead of Sunday’s election.” CNBC. 26 June 2018 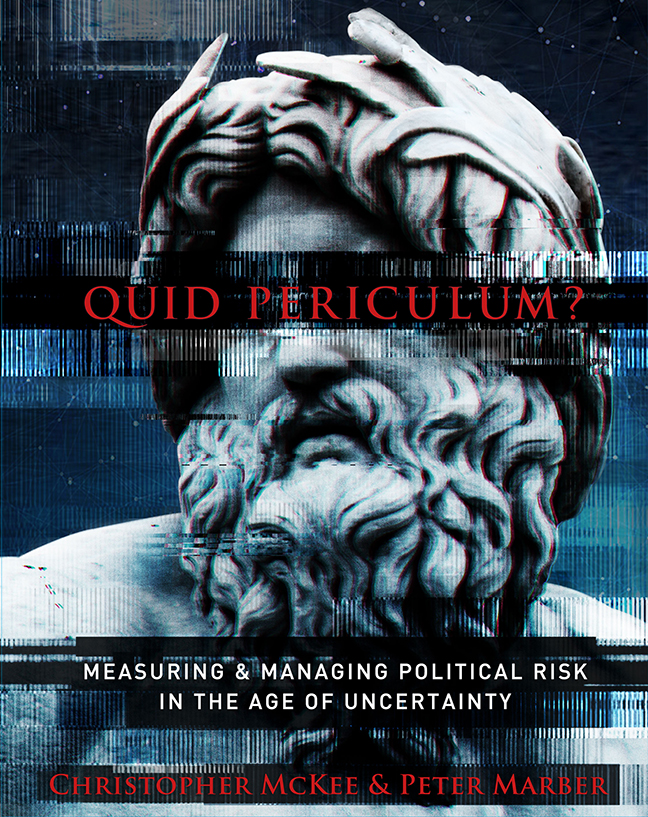 There’s never been a more volatile and uncertain time in recent history. As the recent pandemic has reminded us, the interconnected nature of the global economy has made political risk analysis more important – and vastly more complex.  Quant-driven methods have become increasingly de riguer, but what does the future hold for the practice in the face of new and emerging challenges?

In Quid Periculum? Measuring & Managing Political Risk in the Age of Uncertainty, long-time political risk experts Christopher McKee and Peter Marber present approaches and analyses to this new world of risk. From risk forecasting techniques and reliability measures, to empirical findings affecting asset prices and sovereign debt workouts, the role of political risk in the 2020s and beyond is thoroughly explored by the world’s leading specialists. The book also includes an exceptional roundtable discussion among some of the leading names in the field, offering a insiders’ view of issues such as the impact of COVID-19, the future of globalization, new political risks, and risk mitigation techniques.

A unique blend of scholarly and applied efforts, this is the 6th edition of PRS’ series The Handbook of Country Political Risk Analysis.  To order your copy today please click to purchase or contact Louis Carroll lcarroll@prsgroup.com